Nearshoring is gaining buzz in the outsourcing space, but what does the term mean? And what are its implications for business in Latin America?

We define nearshoring, the differences between other types of outsourcing, and its benefits for US companies and beyond.

Nearshoring is the process of outsourcing or allocating a business project, process, or operation to a nearby country instead of a distant country.

As work becomes decentralized and globalized, businesses have more opportunities to divert projects to other countries where labor costs are less expensive.

Outsourcing work and projects to other countries, however, comes with its fair share of challenges.

Nearshoring means companies access the cost-saving measures of outsourcing while maintaining some of the benefits of having business operations close to headquarters.

A business headquartered in Berlin, for example, could outsource a project to nearby countries in the same time zone, such as Slovakia.

Nearshoring as a business practice is growing quickly. According to Statista, the global outsourcing market in 2019 totaled $92.5 billion.

As the COVID-19 pandemic slows down global economic growth and shifts work out of offices and into people’s homes, expect to see businesses pursuing cost-saving measures such as nearshoring.

Nearshoring is different from other forms of outsourcing in a few ways. Nearshoring means that companies look to companies in nearby countries to partner with on projects.

This differs from other popular forms of outsourcing, which include:

Onshoring is similar to nearshoring, but with one critical difference — business operations are outsourced to a service provider or contractor within the country’s borders.

Onshoring often is not as cost-effective as offshoring, nearshoring, or farshoring, but is an option for businesses in countries that offer incentives for bringing jobs or work back from a previously offshored site.

Offshoring, according to Forbes, is the process of moving company factories and facilities from the location of the company headquarters to a country with lower labor costs.

Offshoring takes advantage of lower labor costs by physically moving offices or facilities from one location to another.

A custom software company, for example, might have a sales team located in New York, while their entire software development team works in Ukraine.

Farshoring, on the other hand, is the most familiar type of outsourcing to most people. Farshoring occurs when a business remotely outsources parts of their business process to workers in more distant countries.

Unlike offshoring, where businesses completely relocate a branch or sector of their operation to another country, farshoring outsources specific operations to contractors.

Nearshoring, however, remains a viable option for businesses that wish to have the benefits both onshoring and farshoring.

Businesses have many options when it comes to outsourcing operations.

Nearshoring has a few primary benefits for businesses in any region of the world:

Argentina, for example, has a much lower average hourly rate for outsourced IT services than the United States. 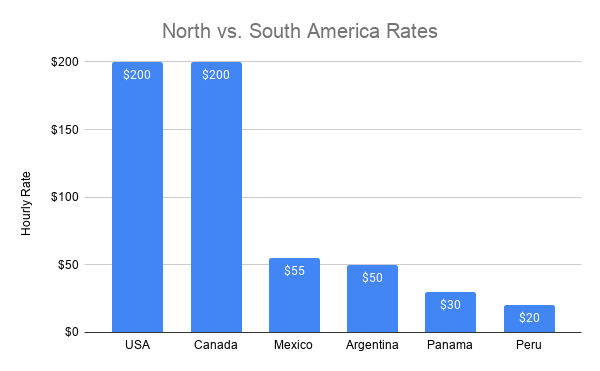 Businesses that engage in nearshoring also benefit from outsourced teams working in the same general time zone and a better cost to quality ratio.

A business in the UK, for example, could outsource some of its operations to a partner in Poland and only have a 1 hour time difference when planning work schedules, meetings, and other important calls.

Closer proximity also means more familiarity and preparedness for any potential disruptions in communication and culture.

Argentina is a prime candidate for nearshoring from countries in South America and in North America, such as the U.S. and Canada.

Here are 3 reasons why businesses should consider nearshoring to Argentina:

Buenos Aires is now full of multinational companies that partner with firms across Latin America and the world.

Argentina has a highly educated workforce. Argentine universities draw students from across Central and South America to study. Some even choose to stay in the city after graduation. Argentina also has a high rate of English speakers, making nearshoring to Argentina even more appealing to businesses in the U.S. and Canada.

Finally, Argentina’s proximity to other South and Central American countries, as well as its time zone, makes it a prime location for nearshoring.

Nearshoring Benefits Businesses Around the World

Nearshoring is the process of outsourcing projects or operations to a nearby country, as opposed to a faraway one.

Nearshoring has many benefits for businesses, including reduced labor costs, proximity to headquarters, and fewer language and cultural barriers.

Offshoring, farshoring, and onshoring provide some of these benefits for businesses, but none of these options combines them in the way nearshoring does.

Argentina is a top candidate for nearshoring operations from Latin American countries, as well as the U.S. and Canada.